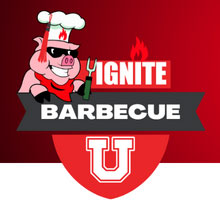 Learn all there is to know about cooking fish, seafood and using a Pit Boss Ultimate Griddle!

Chris has won more than 50 national barbeque championships, and over 600 individual awards including the Jack Daniel’s World Championship BBQ Sauce Championship, and the Grand Daddy of them all, the World Series of BBQ, the American Royal in Kansas City, where he was an 8-time Grand Champion.

He continues his passion of BBQ by promoting, mentoring and providing BBQ Classes.